For the first time since we moved to Virginia three years ago, we were able to sneak away last weekend for a quick trip to Washington DC. We’ve never been to the DC area so we were really looking forward to seeing a few of the sites. The purpose of our trip actually had nothing at all to do with sight-seeing, but rather to spend the weekend with our oldest son who lives in California. He was in DC for a business trip and he invited us to join him. Of course, momma couldn’t say no! 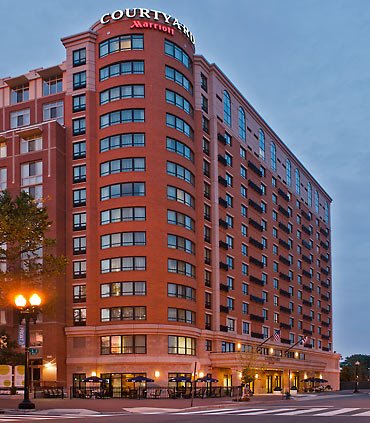 The location of the hotel turned out to be perfect, as it was in walking distance to pretty much everywhere we needed to go. We woke early Saturday morning, headed down to the hotel restaurant for breakfast (which, by the way, had the best breakfast potatoes I’ve ever had … seriously … they were THAT good!) then headed out to do some sight-seeing. After some inquiring about the best way to travel, we decided that our feet would get us the farthest in the least amount of time. And we were off! The Capitol was only about six city blocks from the hotel. Easy to get too, not so easy on the return when the temps had climbed to 94 with ridiculous humidity. 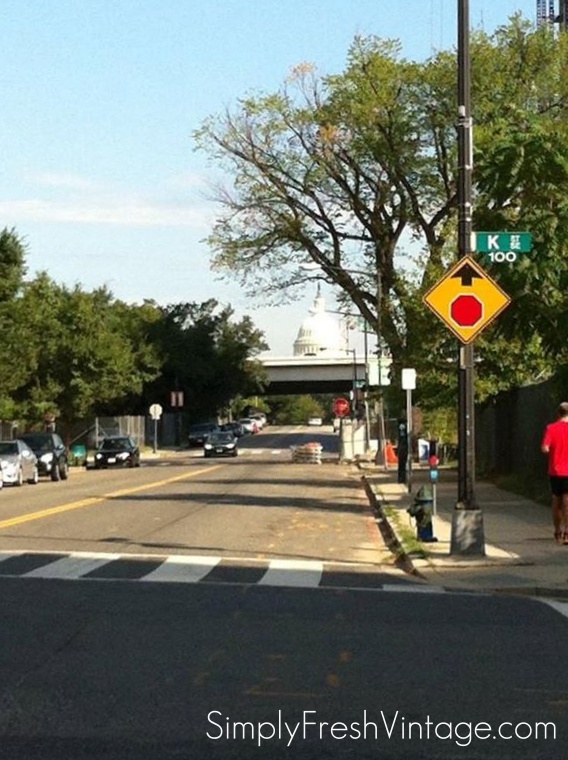 It seemed that everywhere we looked, major construction was going on.  From tearing down old buildings, to erecting double-digit high new apartments, there were chain-link fences, bull-dozers, cranes, and construction materials everywhere.  But every other block or so, we’d find a spot of pretties to remind us that all that construction will eventually bring beauty to this once run-down neighborhood. 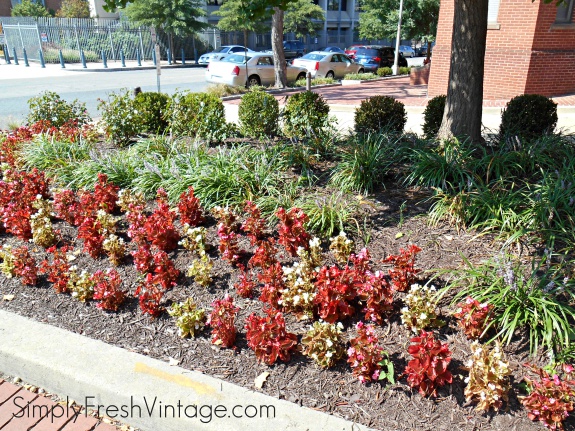 I really loved this section of row houses … it reminded me of the neighborhood in San Francisco that I grew up in.  Yes, I was raised in a beautiful old Victorian. 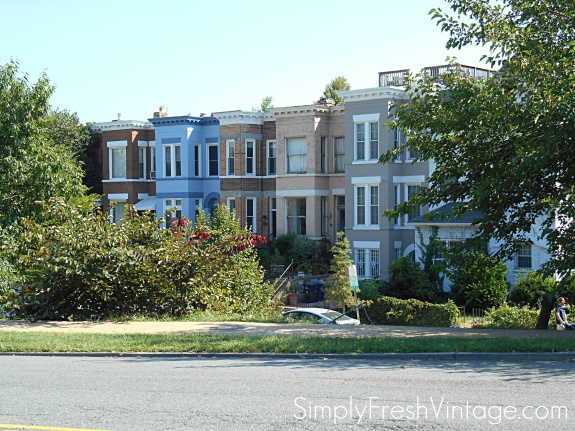 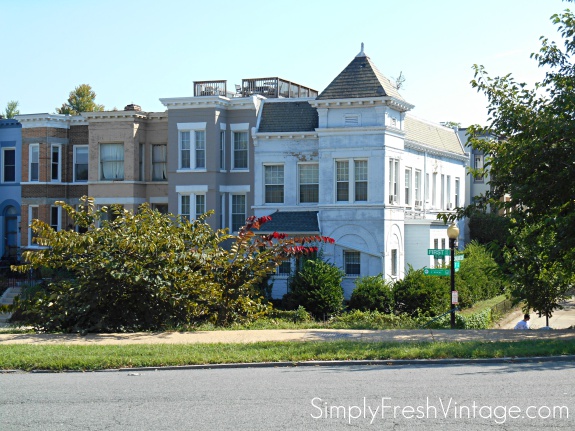 I also loved the variety of doors found on these homes. Definitely need to find a salvage place in DC where I can get my hands on a couple of these. Beautiful! 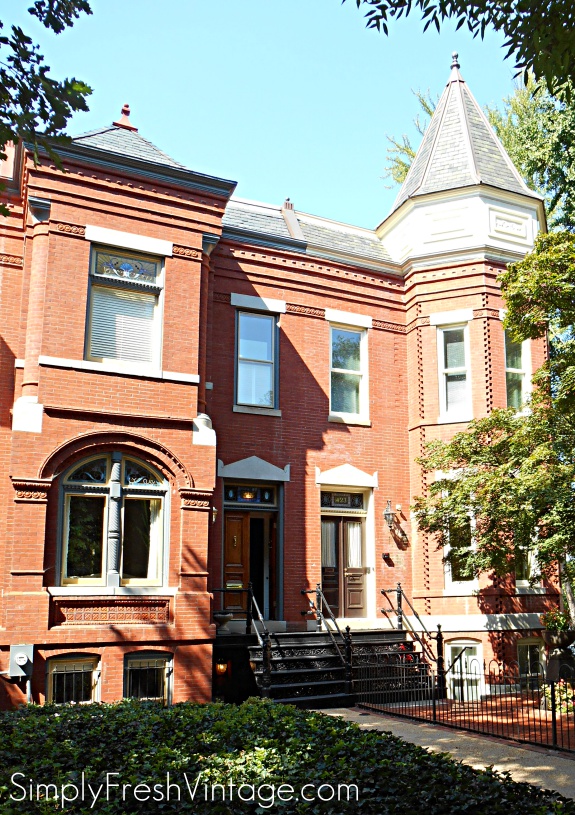 Just another block away, and we came upon these doors. I can’t imagine how much these weigh! 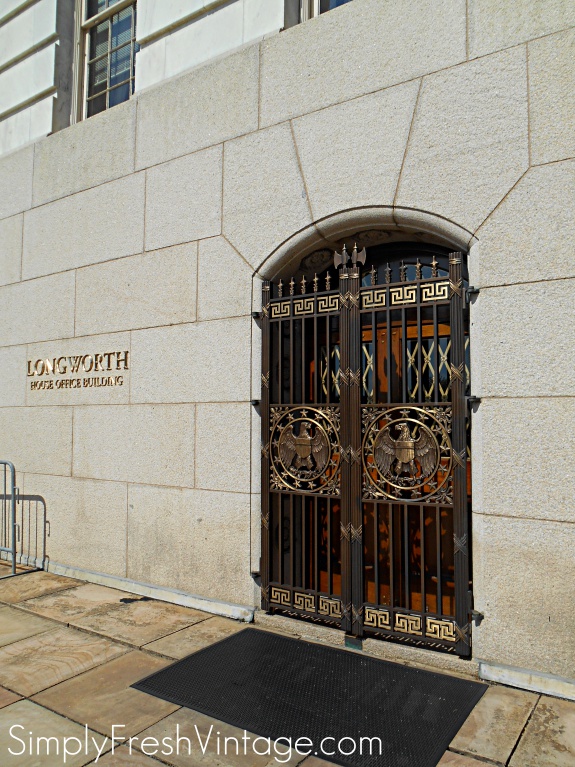 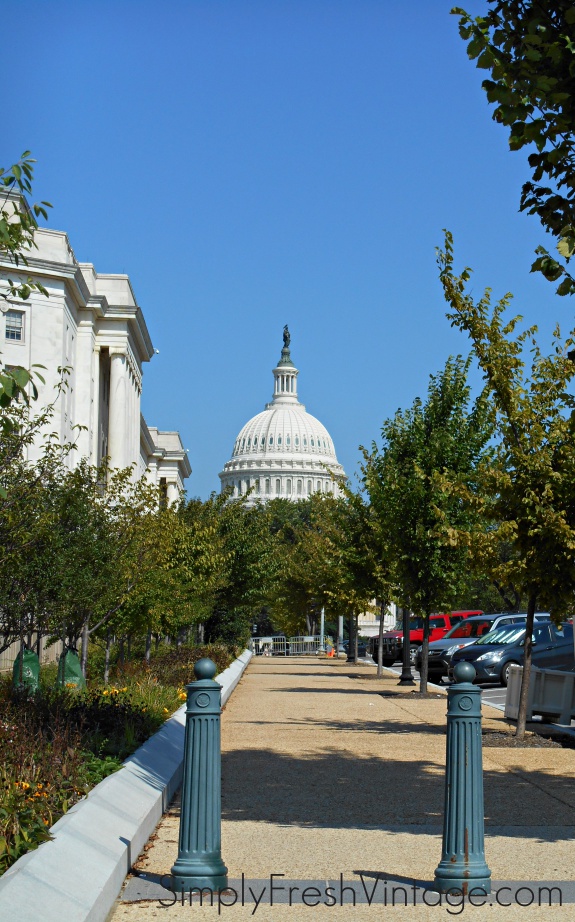 We were excited to have our three youngest with us on this trip.  With one in college, it isn’t often that we get to all travel together anymore. Our daughter (on the right) brought her best friend with her. 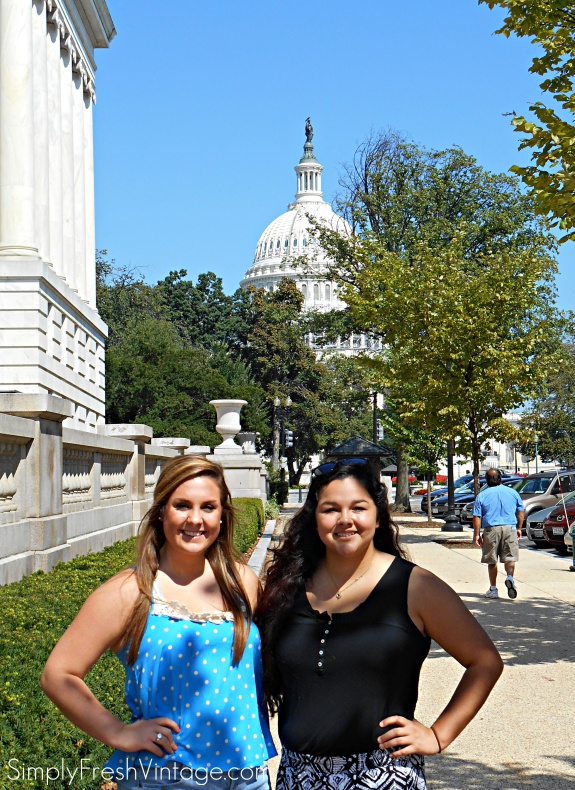 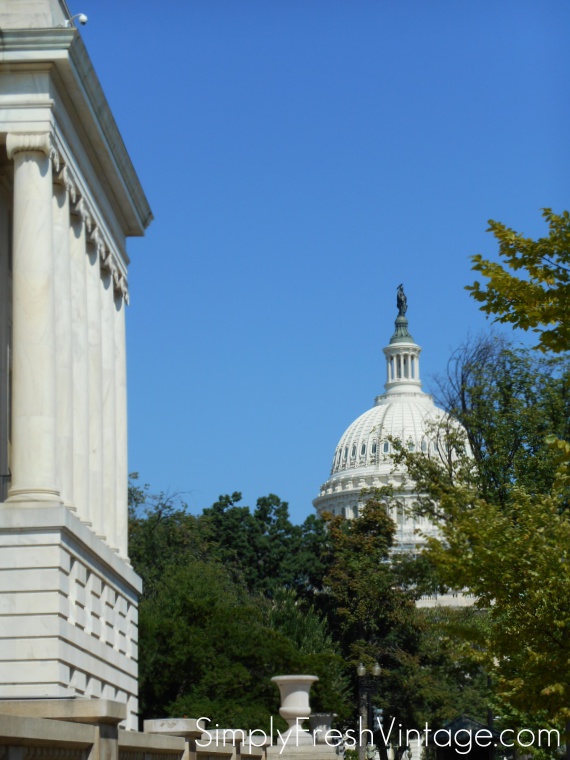 And before long, there she was … in all her glory. Wow! I must admit, it was a bit overwhelming when we first entered the courtyard. I realized after I got home that was actually the back of the Capitol, but nevertheless, still stunning. All I could think of when standing there was the amount of talent, time, strength, and sheer willpower it took to build this magnificent edifice.  As you can see, they are in the process of doing some restoration work on the main rotunda. 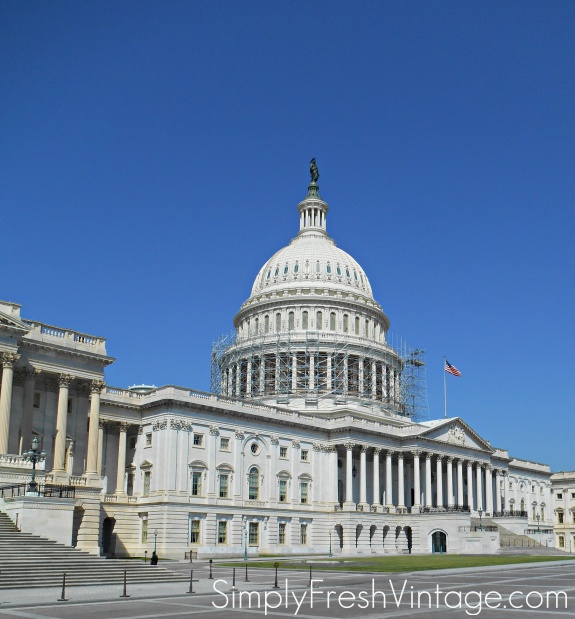 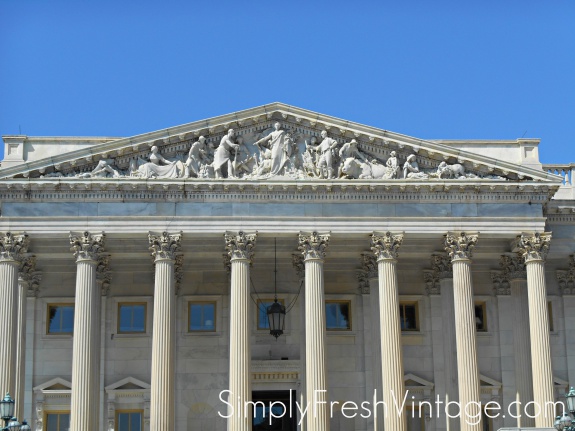 We had a few hours to spend there, and it was really too hot to be outside for very long, so we went ahead and took the Capitol Tour. I was so taken with everything I kept forgetting to take pictures, but I did get a few in. These are pillars in the crypt that hold up the main rotunda. There are 40 pillars. The crypt was originally designated to be the entrance to the tomb of George Washington, however, Washington was, in fact, never buried there, but rather at his home in Mt. Vernon. 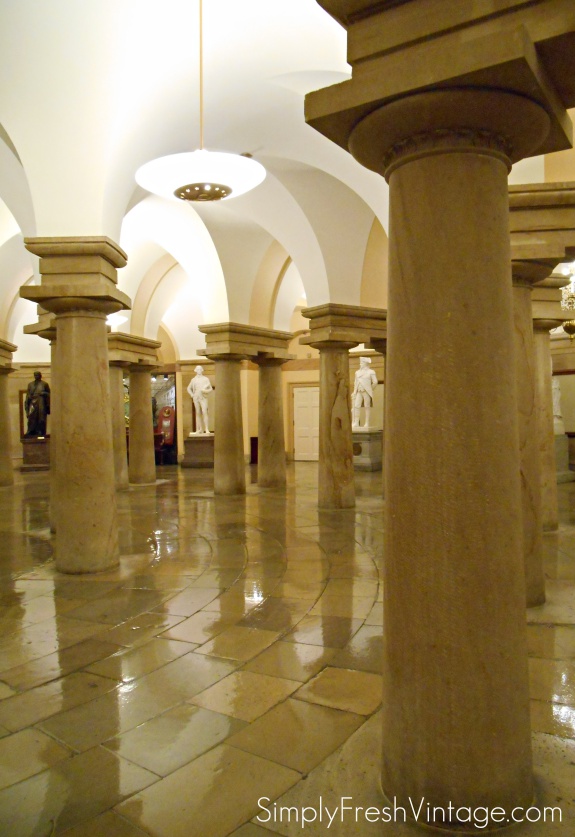 Leaving the crypt, we headed upstairs to the main rotunda. I loved the architecture on the hand railings. The scroll design brings a delicacy to the hardness of all the stone. 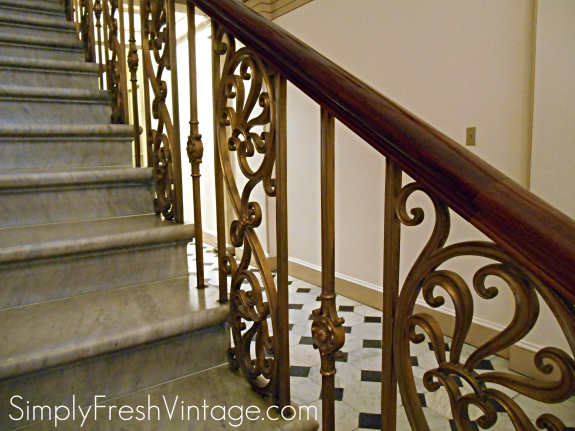 Of course the highlight of the rotunda is The Apotheosis of Washington, the stunning fresco painted at the top. Because of the restoration project, we were not able to see the entire painting. 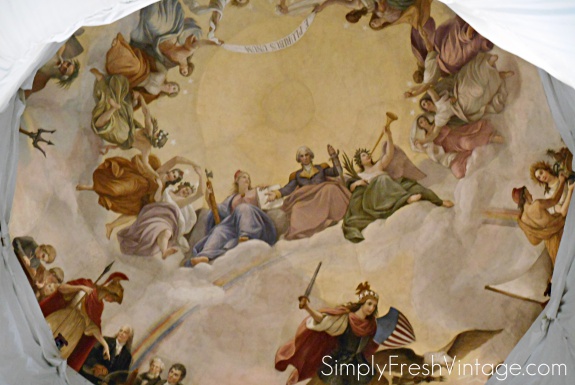 The Capitol is filled with artwork and statues, including these two of Abraham Lincoln and Ulysses S. Grant. 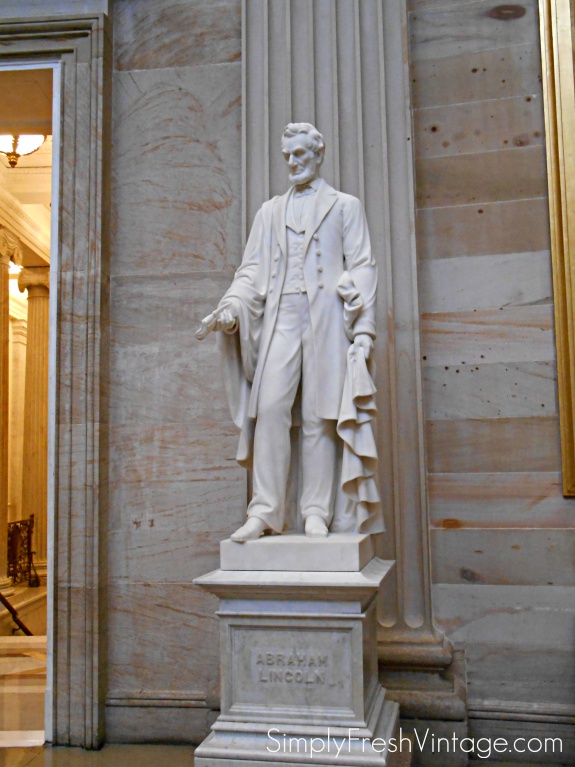 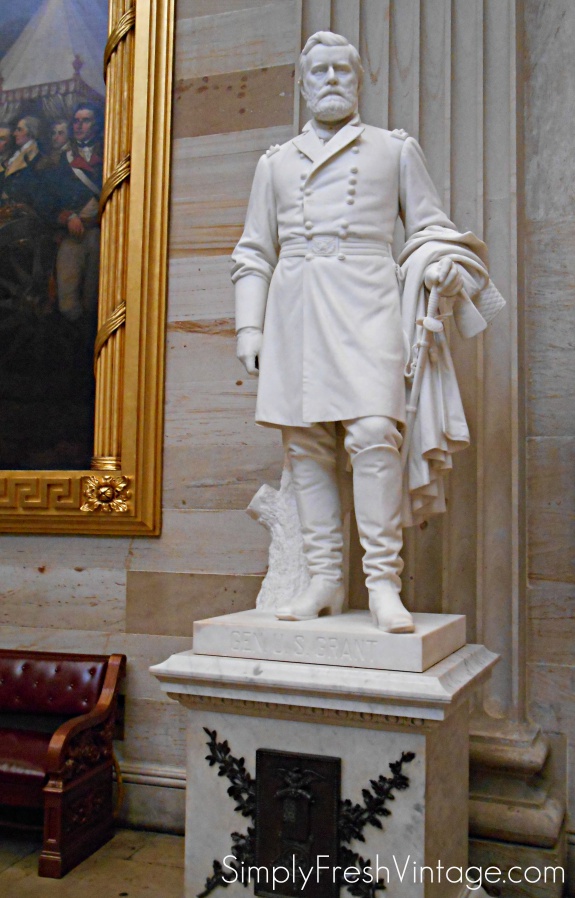 Another room that we visited was the National Statuary Hall, formerly the House of Representatives, which is now filled with statues donated by individual states in the union. Again, the architecture was incredible! And yes, the ceiling is pink. 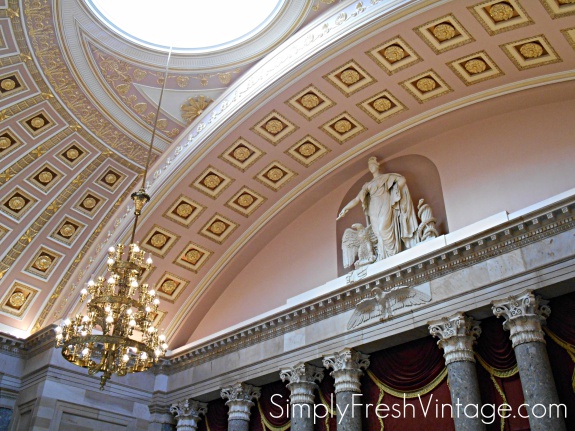 There were a few other rooms on the tour as well. When the tour was over we headed across the street to the Library of Congress Thomas Jefferson Building and the Supreme Court Building. Unfortunately we didn’t have time to go in. 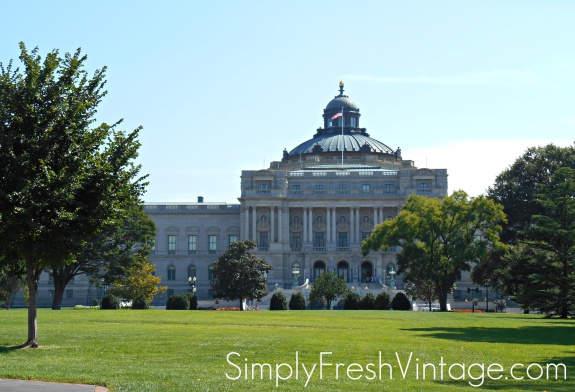 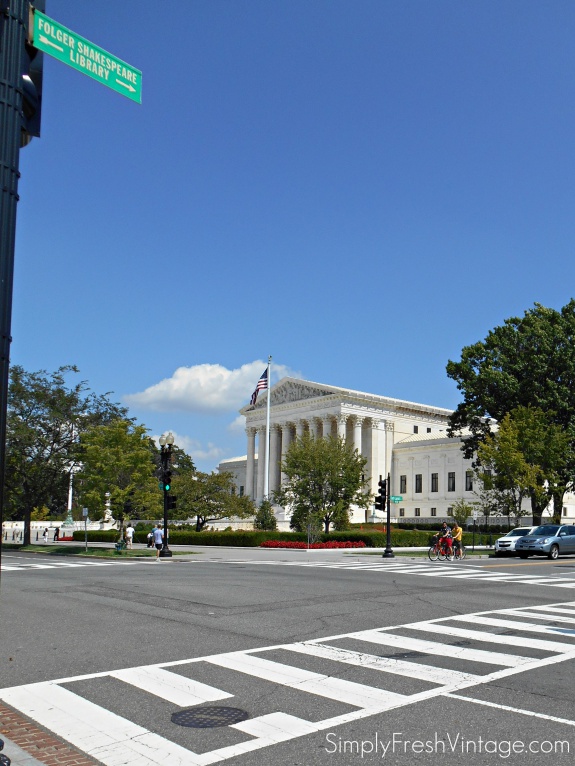 So remember when I said that my son was in Washington DC on a business trip? His trip brought him to the Washington Nationals stadium for their Faith Day. Another first for our family … a major league baseball game. 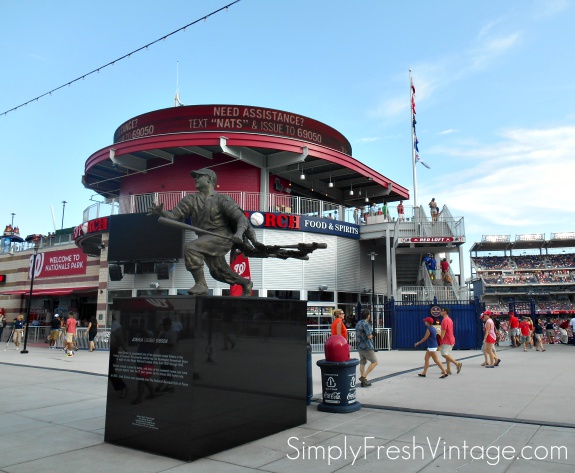 And to make it even more memorable, we had box seats! 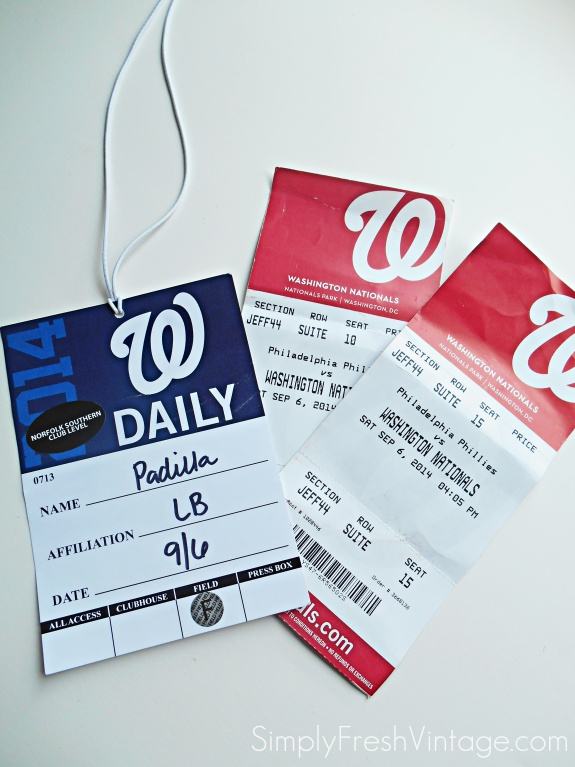 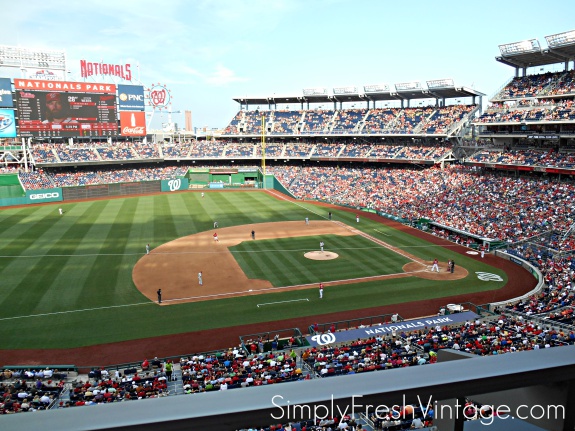 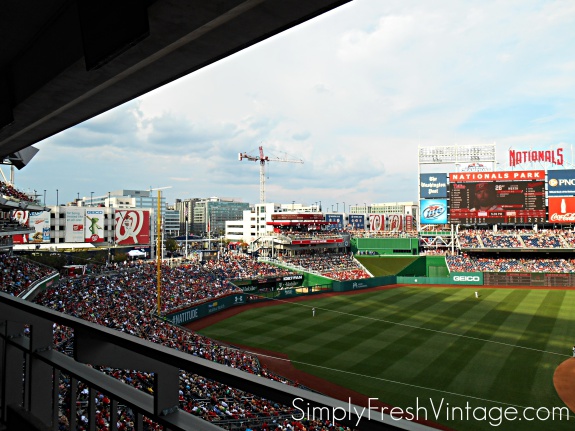 This year’s Faith Day featured a post-game concert by Lincoln Brewster, who my son works for as a sound engineer. As soon as the game was over they began to roll out the stage, but unfortunately they didn’t get very far. As we watched the clouds in the distance begin to loom darker and darker, it wasn’t long before the announcement came that the concert would be cancelled.  (In the picture below, my son is the one standing closest to the back wall in the shirt that kinda matches the wall.) 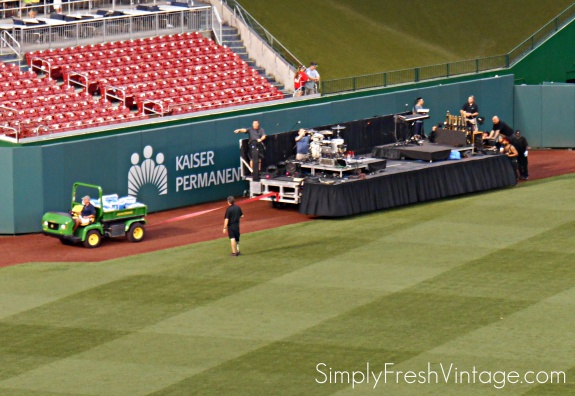 They were still able to get in a few interviews with some of the players as well as with Lincoln Brewster. You can really see in the background how dark the clouds got. 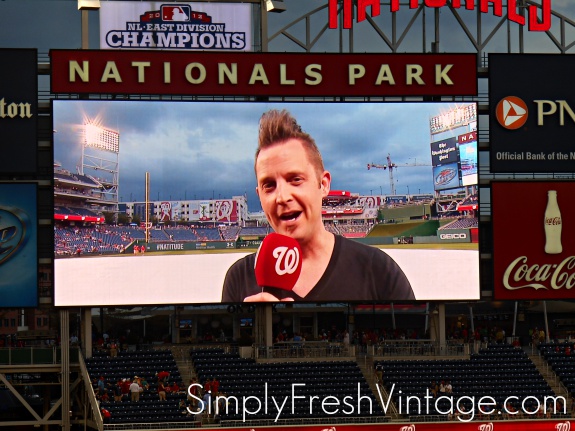 Thankfully we had the box so that we could try and weather the storm. Unfortunately it just hung around too long and we had to make a dash for it. Two of our sons are on the right (the one with the Liberty shirt and the one with the cast.) They were excited to bring some of their friends from school that live in the DC area. 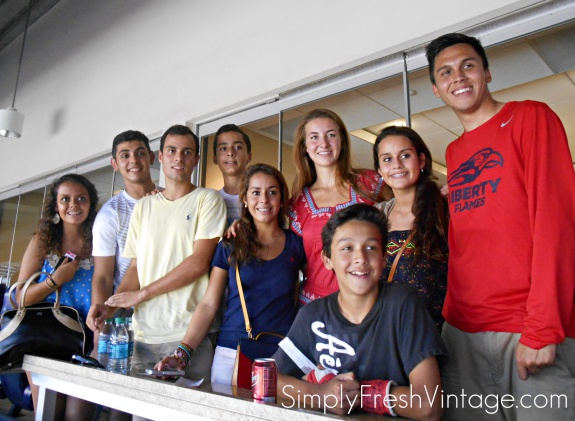 So although we didn’t get to hear the concert, we did get to spend time with our son and the Lincoln Brewster team. We ended up leaving the stadium in the middle of that storm, which fortunately was a whole lot more lightning than rain … a good thing since we had to walk/run back to our hotel.

Later that evening we had dinner at Gordon Biersch Brewery. If you ever have a chance to eat there, get the Fish & Chips … delicious!

Sunday morning we went to breakfast with our son and the LB team.  We tried to get into Founding Farmers, but the wait was too long and the boys had a flight to catch. So instead we drove around in the craziness of DC traffic, in the midst of a triathlon, to find another place to eat breakfast. We ended up at a cute little dive called Luna’s on Connecticut. Perfect little spot for a home-cooked meal.

So, what did we learn on our maiden trip to Washington DC?
1 – Park your car at the hotel and don’t get in it again until your ready to leave. Either walk or take the metro to anywhere you need to go.
2 – Wear GOOD walking shoes.
2 – Better yet, don’t even stay in DC. Book your lodging outside of the greater DC area, somewhere near the Metro, though, and then take the Metro in.
3 – Plan quite a few days to visit. I was glad we got to see the little we did.  We weren’t really planning on even getting that it.  Our best hope was to do a few drive-bys for pics.
4 – Do some homework before you go! Look up the places you want to visit and peruse their websites.  The more info you have before going, the richer your experience will be.
5 – Eat well and drink lots of water. Don’t forget to take lots of pictures.
6 – Have fun!

Have you ever been to Washington DC? What’s your favorite memory?

This error message is only visible to WordPress admins