Every once in a while, something happens that causes one to stop, take a deep breath, and regroup.

I had one of those moments a little over a week ago, when a funny little red house with a little”x” popped up on my computer. 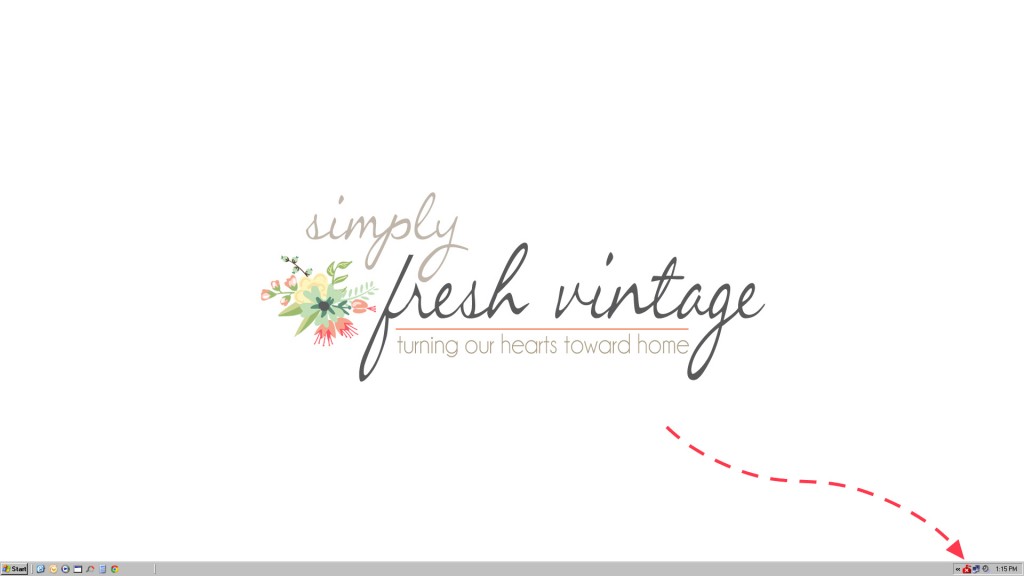 Do you see it?  Way down there on the right?
Yep … that cute little guy.

I love red, really … I do!  But as we ALL know, something in BRIGHT RED on your computer screen is usually not a good thing unless you put it there yourself.

This icon is part of my computer security system.  It’s my protection against all evil things that want to invade my computer “house.” It’s usually green.  Occasionally yellow, but for the most part green.  I have never seen red.  Never.  Ever.  Nope … NEVER.

I thought I knew what was behind that little red door … I mean, how bad could it possibly be, right?  Probably just a little stink bug that squeezed through the screen and took up residence for the weekend.  One good flush down the security scanner and all would be well with the world.

I should be so lucky! 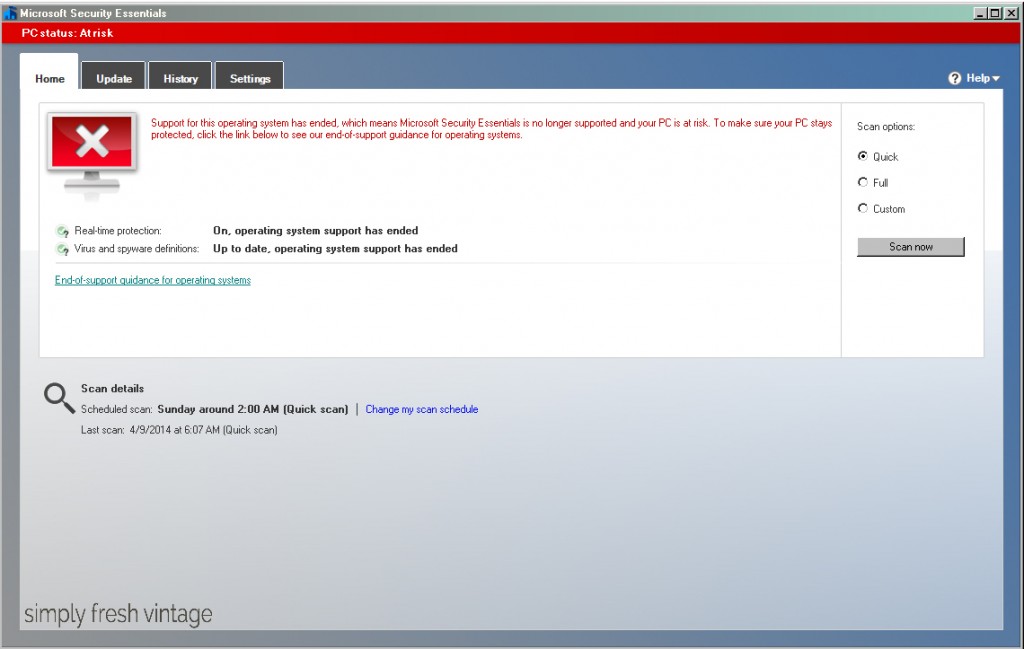 Can you read it?

Support for this operating system has ended, which means Microsoft Security Essentials is no longer supported and your PC is at risk.  To make sure your PC stays protected, click the link below to see our end-of-support guidance for operating system.

What on earth does that mean!

I made a quick call to my trusty computer tech guy (Larry), who must have been at batting practice all week, because the curve ball he threw me knocked me out right there on home plate.

Conversation went something like this …
Keep in mind that I’m in Virginia, Larry is in California … where my computers were born.
Larry:  Hey Lani … what’s up?
Me:      Hey Larry … gotta quick question.  My security program popped up red saying something about support for the operating system ending.  What EXACTLY does that mean?
Larry:  You haven’t heard?
Me:      Heard what?
Larry:  Microsoft will no longer be supporting the XP platform after April 9.
Me:      (again) So … what EXACTLY does that mean?
Larry:  It means that all those security updates that Microsoft issues to keep your computer safe, they won’t be happening any more, which means your computers will be highly vulnerable to every bug, virus, malicious intrusion, etc.
Me:      Oh!  Okay! Well, can it be fixed?
Larry:  Sure!  We’ll just need to replace the operating system with a new one.
Me:      Great!  Well let me know when you want to do that and I’ll make sure no one’s on the computer (‘cuz he can sign-on to my computer and make that computer kinda magic happen if necessary.)
Larry:  (chuckling)  Well, that’s not quite how it works.  You’ll need to ship me your computers so that I can back everything up, remove it all, load up the new operating system, put everything back on and hope and pray that it everything works.
Me:     Oh.  (dead silence.) Ummmm … I think you better send me a quote for all of that and let me check with hubby. In the meantime, since April 9th is like four days away, and since this obviously won’t be fixed in time, what do I do?
Larry:  Be very, very careful.  Keep your anti-virus software updated and scan every day … even twice if you think it needs it.  And shut everything down at night.  Oh …. and the most important thing … don’t let the kids get on the computer.
Lani:    Okie dokie!  I’ll call you next week!

I received his quote, took three big gulps, and quickly decided to look at my options.
A)  Update what I have to Windows 7 or 8.
B)  Buy a new Windows PC.
C)  Enter the world of the Apple.

No matter which option I chose, there was going to be a learning curve … and a huge one at that.
This is a crucial decision!
Which way do I go?
I’ve lived in a PC world since home computers were invented back in the day.
The closest I’ve ever been to an Apple is my phone.

I couldn’t make this decision alone … I needed lots of advice.
First call went to my son.  His first computer was Apple.  So was his second, and his third, and his desktop.  Guess it’s a no-brainer what his recommendation was going to be.
Then I posted my dilemma to a few blogger friends … they all recommended Apple.
Then I talked to Mr. SFV.  He wasn’t so quick to jump on the Apple bandwagon when I told him the price.

SOOOOOOOOOOO …
after looking long and hard at all the options …
I am now the proud owner of a new iMac. 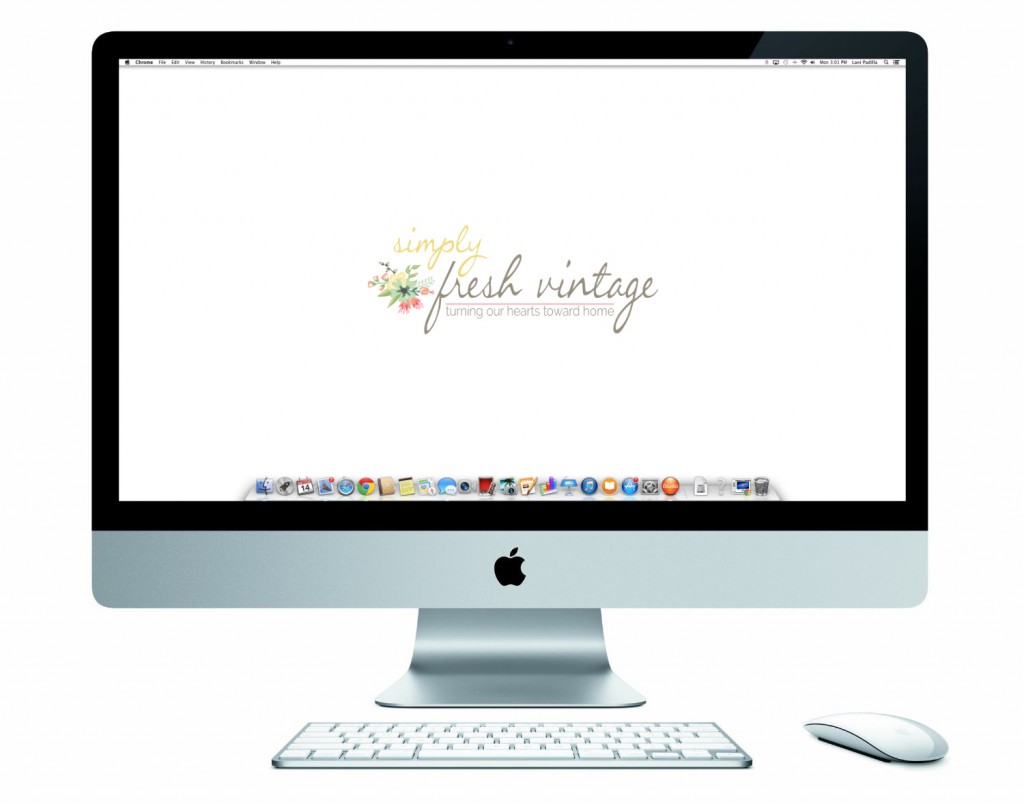 The learning curve is CCCC…RRR…AAAAA…ZZZZ….YYYYYY! … at least for me.
Funny … my kids had absolutely no problem jumping right in and “showing” me how to do everything.  I think they’re just born with computer know-how DNA in them.
Me?  It’s a whole brain re-training thing.

… Scroll direction … swiping … the red button on the top left to close, instead of the x on the top right … docking and launchpads … the “file” system … programs vs. apps … I’m already exhausted!

All in all, though, I’m really excited about this new member of our family.  I’m really hoping that once I get the hang of it, I’ll be way more efficient and my blogposts and pictures will become super spectacular.

Are you a proud member of an XP?
Did your world come crashing down last week? 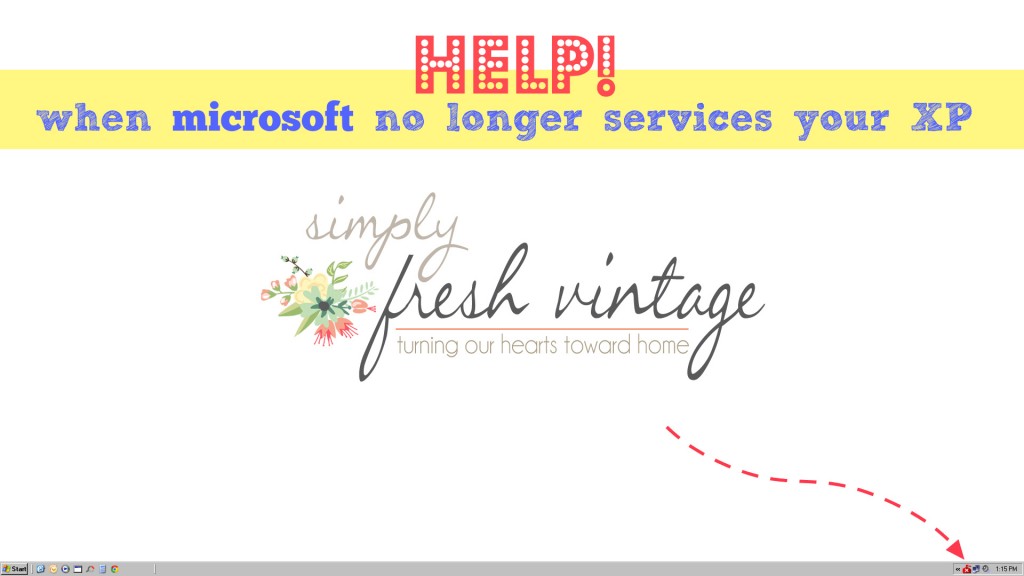 What are you going to do?
A) Update what you have
B) Switch to a newer PC
C) Bite the Apple like I did?