I’m so excited to share with you my first “big” project.  It’s one I’ve been dreaming of for years.   It’s not a project that will be completed overnight, but one that will definitely evolve over time. 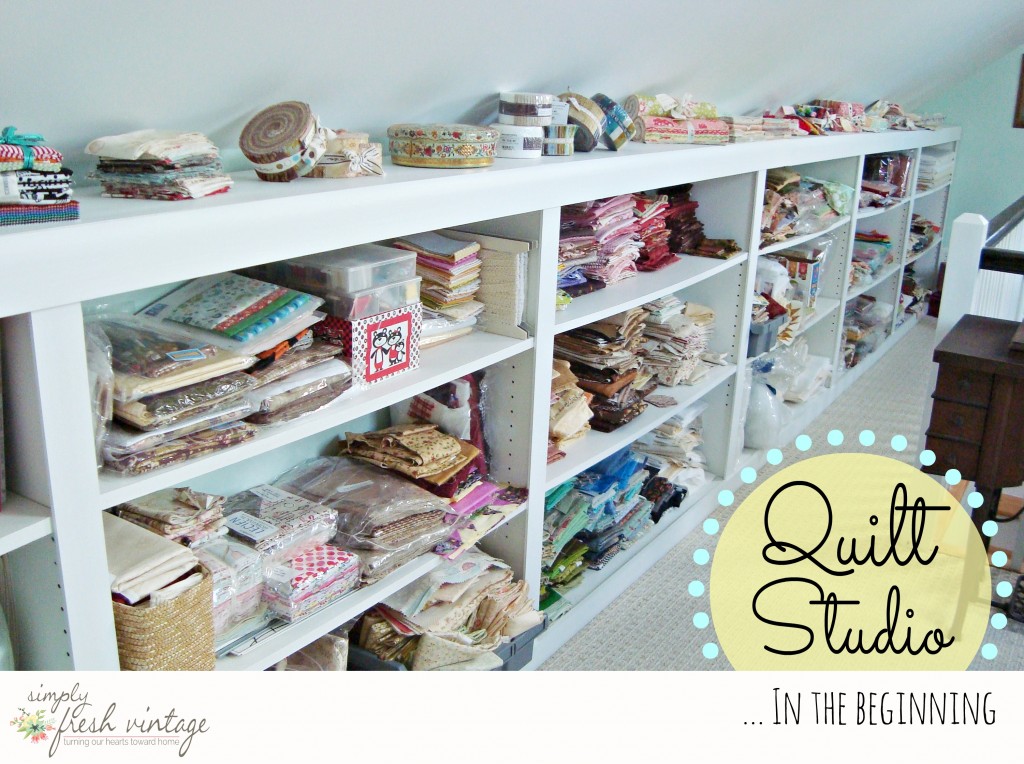 When we lived in California, I owned an online quilt store.  And yes, it’s true … if you own a quilt store, your chances of actually getting any quilting done greatly decrease.  But that doesn’t mean that you can’t  “collect” as much fabric and kits and precuts as your house will hold, because you may eventually retire and have all the time in the world to actually quilt again.  When we closed the store and began the arduous task of packing, it quickly became apparent that I had more than a lifetime’s worth of quilty stuff to keep me busy.  I should never, ever, ever have to buy another piece of fabric again, right?  WRONG! 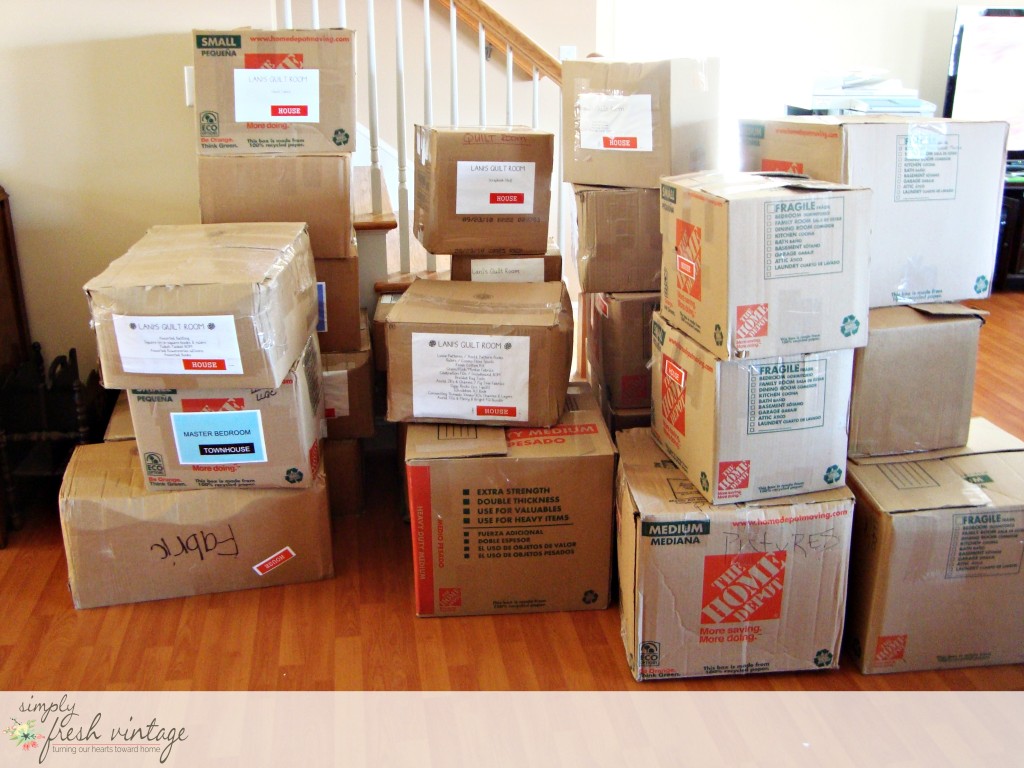 Almost every box had a very detailed label of its contents.  Since most of this was packed a good nine months prior to our actual move, it really helped having those labels when it came time to unpack.

When we first moved into Sunnyside Manor, we were absolutely certain that my quilt studio would go in the basement.  There was plenty of room to spread out and I could pretty much take as much room as I needed.  It was fun to finally unpack all the boxes and get everything sorted out … it was like Christmas in March!  Eventually we would get around to finishing the basement, but in the mean time it seemed like the perfect space to call my own. 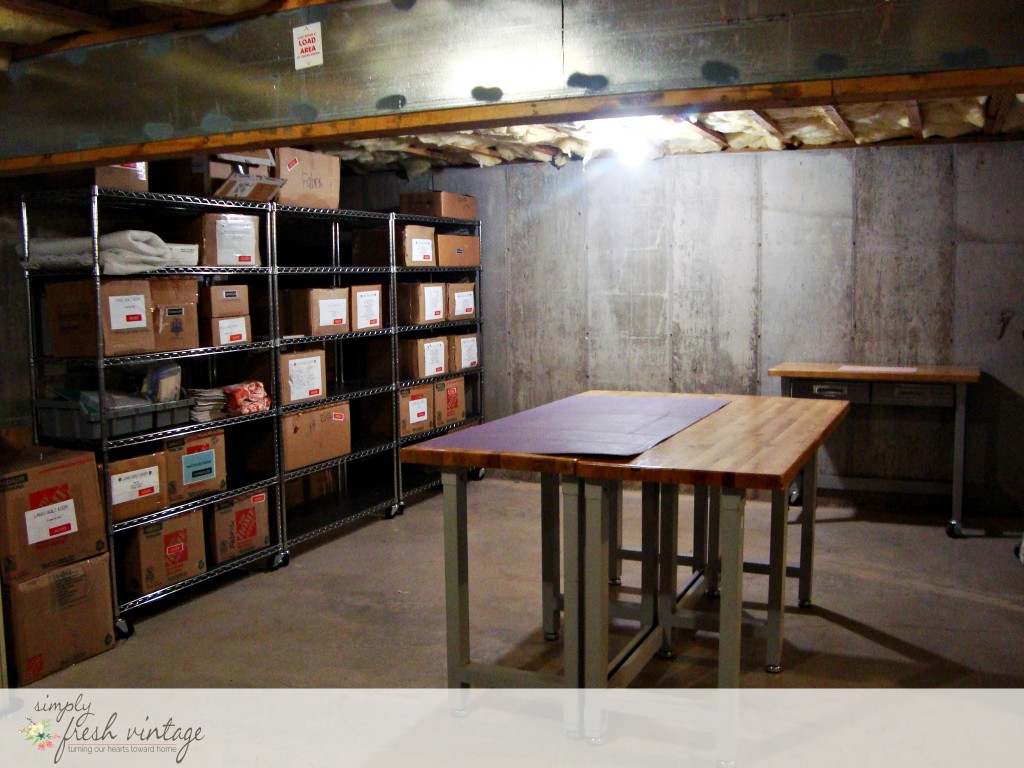 After a few months of figuring out what else we would do with the basement, we began to move things around and my “space” began to shrink.  I still had more than enough room, but other people … aka “the kids” … were beginning to take advantage of the unfinished space, mainly to kick around soccer balls and learn the art of catching a little ball with a lacrosse stick.  This wasn’t working … no how … no way.

So one day I got a bright idea.  How about if we take the space in the loft, which for the most part isn’t really “usable” space, and line the knee-walls with shelving and turn that area into my studio.  Perfect!  Now to sell the Mr. on this.
Side note:  The “loft” is off of the master closet.  The stairs are a somewhat private stairway leading to the master suite.  The room on the other side of the loft was designated as the owner’s “office.”  We decided to let our college freshman use it for his bedroom, at least for a while. 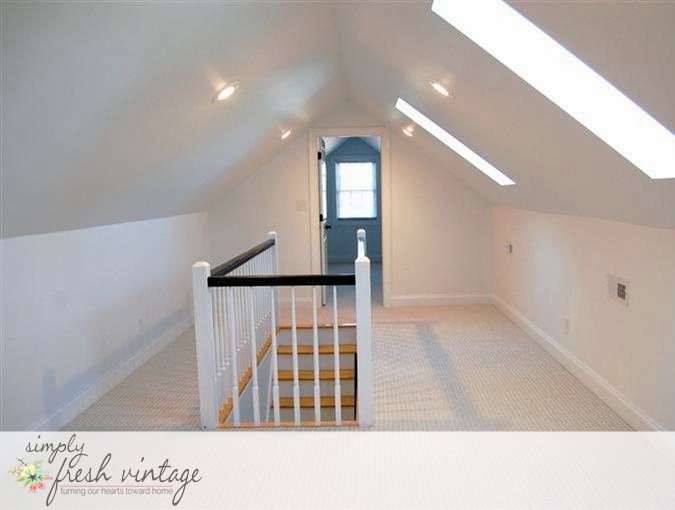 My original plan was to line the entire left side with shelves.  We’ll see if everything I have fits, and if we need more room, we’ll tackle the right side. 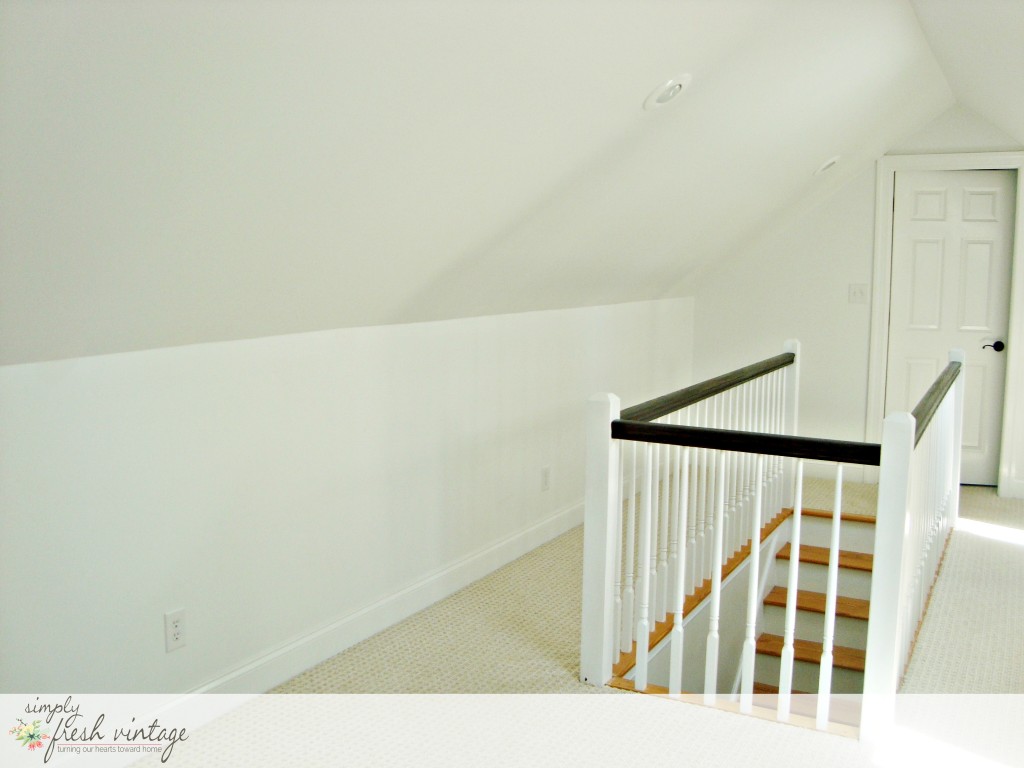 There was only one teensy-weensy problem with my plan.  Having custom-built cabinets was absolutely out of the question … actually more like completely non-existent in the budget.

To further complicate this project, my dear, sweet hubby doesn’t do wood.  Period.
He can fix a car, do anything electrical, fix just about any plumbing issue, paint like a pro. But wood?   So NOT happening.

I priced bookshelves from every place imaginable, but either they were too tall, or not tall enough, and definitely wouldn’t be wall-to-wall.
And then it happened … HE suggested we build them ourselves.  How hard could it be?

Have you ever seen the HGTV show “Renovation Realities”?
Well, it wasn’t anywhere near that bad, but there were a few moments when I was pretty confident we were ever so slightly in over our heads.

If we had one take-away from this project, it would be to choose your materials carefully. Don’t just go with something (like MDF) because every DIY blog on the internet says that it’s the best stuff in the world, especially if your plan is to make the shelves adjustable. We did buy a small Kreg Jig (best purchase ever … larger model definitely on the wish list), but it wasn’t as “friendly” with the MDF as I think it would have been with a good hard wood. 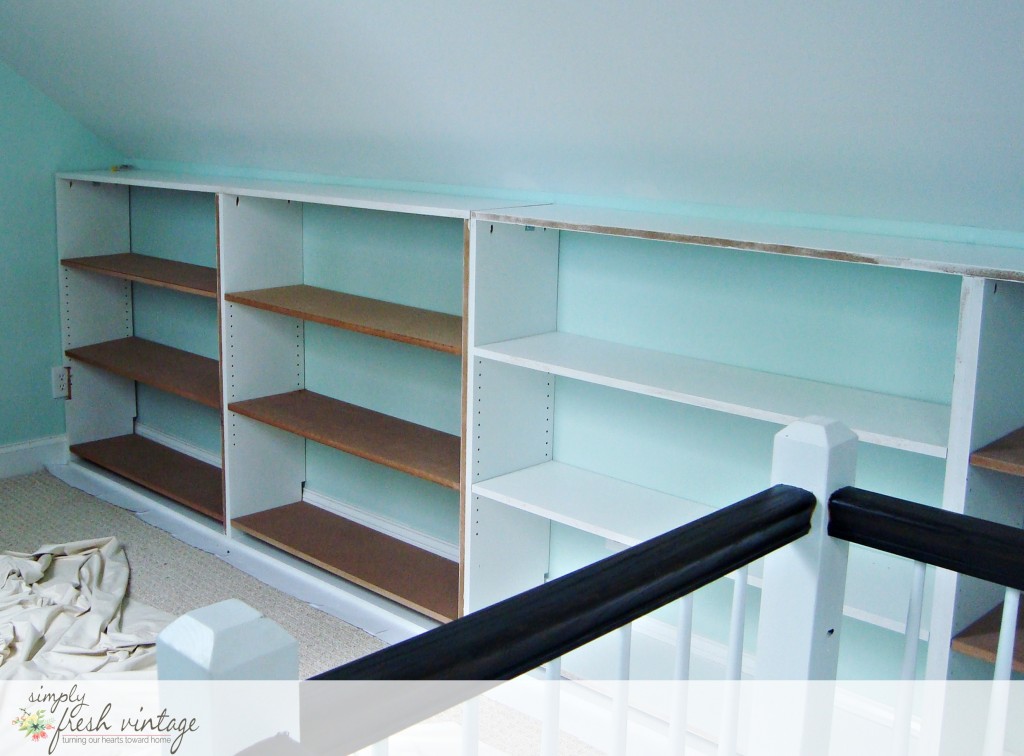 All things considered, for our very first DIY project, I’d say we didn’t too shabby of a job. It hasn’t fallen over, or collapsed (although we might have to install some vertical dividers in the middle of the units to support the sagging shelves.) It’s extremely functional.
And every morning when I walk by, I smile.
And that makes me happy. 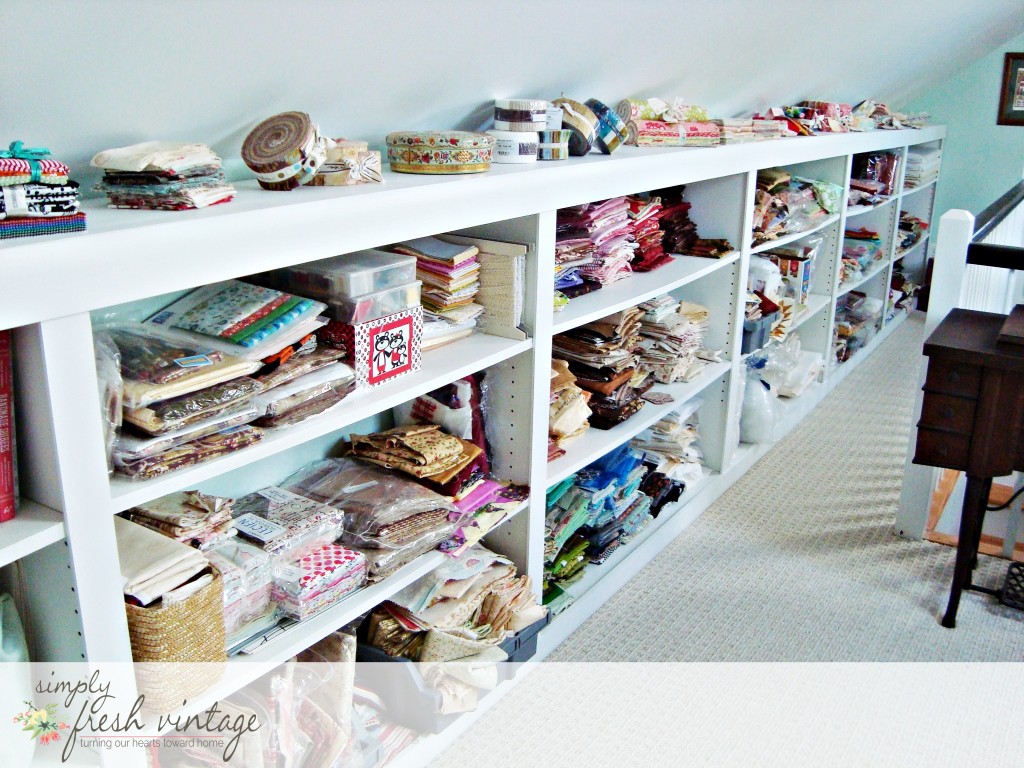 There’s plenty of room for all my precuts, my French General and Fig Tree collections, assorted quilt kits and ongoing projects. 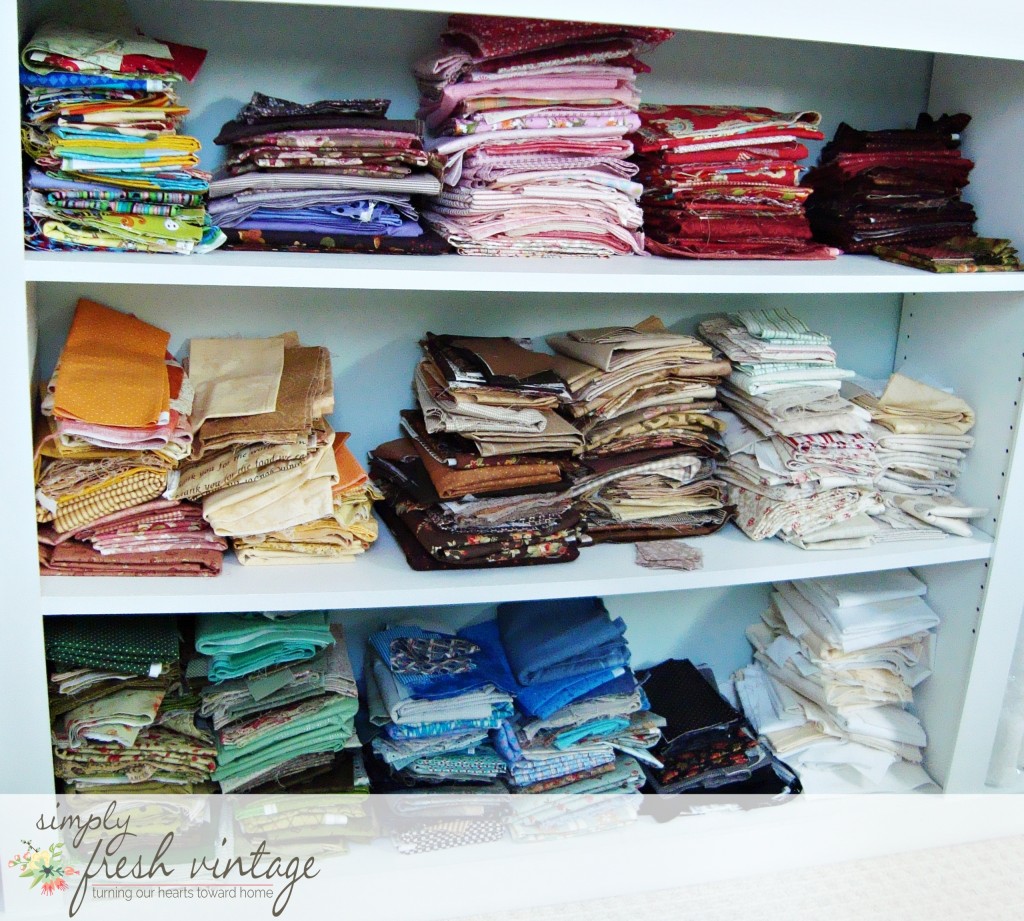 Lots of space for my “stash” … those pieces that are leftover from other projects, but I can’t part with them, because you’ll never know when I might need one or two.

And even a top shelf to display some of my pretties and my favorite block-of-the-month project, the Designer Mystery BOM from Fat Quarter Shop. 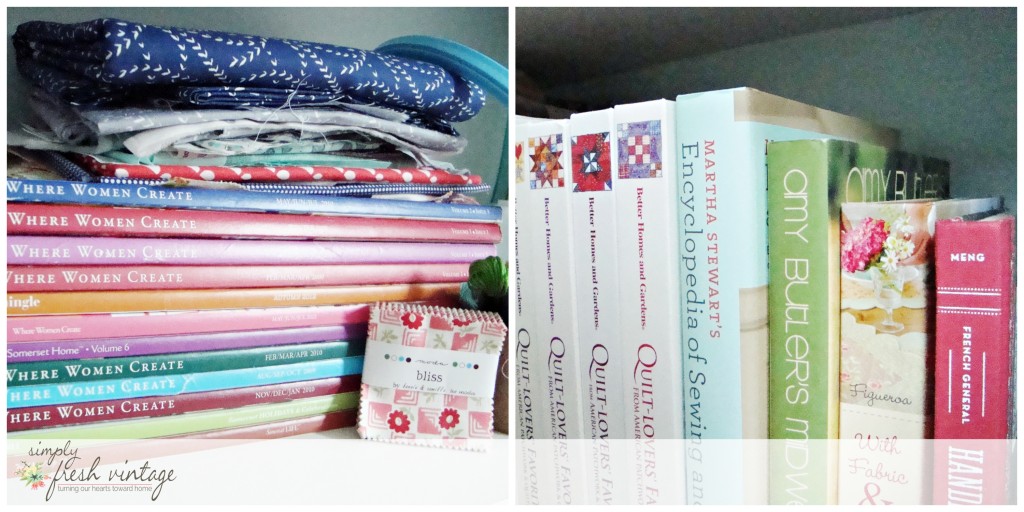 I have lots of quilt books, and issues of my favorite magazine, “Where Women Create,” dating back to 2008.

It is so nice to finally have a place all my own, where no soccer or lacrosse ball will ever be found!

We’re definitely not done yet. You might notice a few major components are missing … small details like a cutting table, and a sewing machine perhaps. But don’t worry, they aren’t too far away!

How about you?  Do you have a special hobby that has taken up its own residence in your home?  I’d love to hear about it!

We’ve switched up some spaces to make more room for the studio … come and see!